The Ethereum open-source blockchain allows developers to create and deploy distributed applications (DApps) and smart contracts. The token which powers this network is called Ether (ETH) or Ethereum, but it should be noted that there is a distinction between the Ethereum token and the Ethereum network.

Ethereum consists of multiple programming languages to allow for more development flexibility, but they also created their own language called Solidity.

On September 30th, ETH was trading at $170, closing the day at $177. October 1st saw Ethereum gaining momentum, reaching $184 in the morning, but slowly started going back down to the day’s starting value at $177 when the day ended. October 2nd reached the $180 once during the day, but it failed to maintain this price, fluctuating at $177-$178 until the day ended. 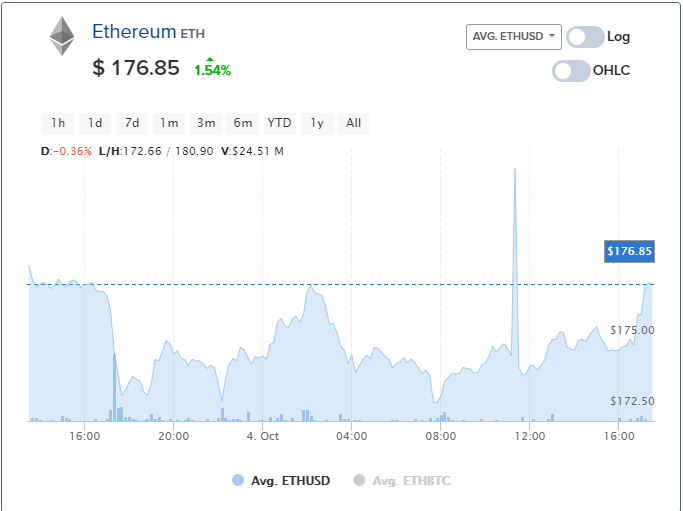 For our Ethereum price prediction, we will be analyzing the performance of both ETH/USD and ETH/BTC pairs.

Ethereum is moving slowly above resistance levels and trying to gain momentum, so we can notice that the ETH/USD pair is breaking from the trendline the 6th of August’s top hit. If the pair closes a bit higher than this trendline, which has an EMA50 ($176.38), it can suggest that the ETH/USD is might expect growing tendencies.

If EMA50 can be surpassed, ETH might rise to a price of $185 or EMA100. Once this level is reached, it can continue to further reach the $195 and $205 price range. As Bitcoin (BTC/USD) has already moved past the EMA10, we expect Ethereum (ETH/USD) to soon copy this movement, pass over the resistance level, and reach higher prices. The MACD is also showing a bullish deviation.

Since the Descending Triangle 2 broke the bottom line two weeks ago, ETH has attempted to climb back to the bottom break region. As there were two rejections by now, it clearly warns of a bear tendency with an upward tilted channel.

The bullish movement will have to break the $185 level and go higher, so that it can negate the bear flag on the Daily. As a result, we can expect Ethereum to dip in the following days, reaching even levels around $150 price.

The charts show that the ETH/BTC pair has been on a downward trend for the past year. But the price has shown lately positive movements distancing itself from previous support levels of ​​0.0155-0.0160 BTC, that were the all-time low.

The price currently trades in the midline of the descending channel, which is along with the 157 moving average. 0.025-0.026 BTC is an important resistance level, which, if broken, can indicate a return to the zone 0.0308-0.0309 and the start of a new uptrend.

An Ethereum price prediction is not complete without taking into account the developments, updates, and projects which implicate the token.

Ethereum has many projects announced with Fortune 500 companies that involved building applications (or dApps, decentralized apps) on the Ethereum blockchain. To power all these dapps or smart contracts, Ether (ETH) is needed. An increase in usage could contribute to a price increase.

As more apps are developed, one would expect the coin supply to get scarcer. While Ether is currently not capped, an infinite amount of coins can be created. But should demand for ETH see an increase, so should the price.

According to the Ethereum Foundation community manager, Hudson Jameson, the forked occurred because of unusually fast block confirmation times.

He went on to explain that the majority of miners on the Ropsten blockchain did not upgrade to the latest software, catching many of developers off guard. This is probably because the update was initially postponed from September 2nd and announced on October 2nd, but it seems that the Ethereum developers went for an early release.

A big Ethereum event, the Devcon5 conference is scheduled to take place in Osaka on the 8th of October.

We have also included some of the most popular Ethereum price predictions for the month of October made by crypto sites.

They noticed the ETH price is “forming a continuation pattern to the upside,” and they expect the ETH price to be around $200 in October. 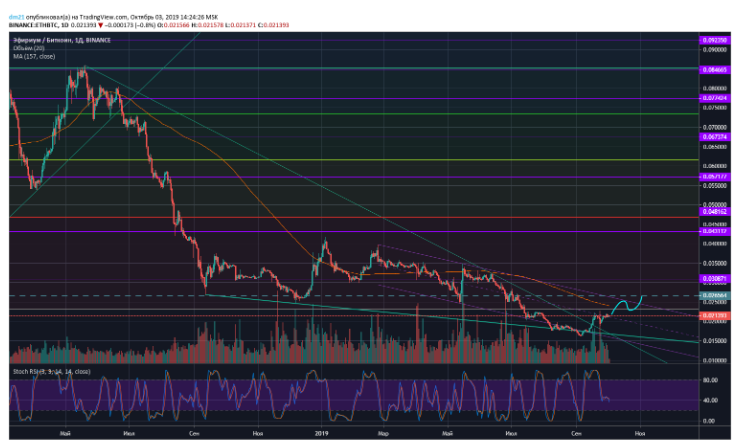 The Poundf.co website releases price predictions for every day of the month, with the highest and lowest values of each particular day.

30rates also posts a table of the daily possible prices for a variety of coins, including ETH. In addition to the highest and lowest values, they also include the closing price for each day.

There is no way of knowing what price will Ethereum reach in the future, but with some market information and analysis, you can form a general idea on which you can base your trading strategy.