After several retracing attempts, Ethereum could finally be on its way to recovery. At press time, following Bitcoin’s footsteps, Ethereum was up by 9.24% over the last 24-hours and was trading around the crucial resistance level of $137.06.

As the second-largest cryptocurrency geared up for a bullish reversal, its network fundamentals were also observed to have witnessed interesting growth. After the massive sell-off on 12 March, also known as ‘Black Thursday,’ Ethereum’s daily active addresses have been steadily increasing.

The upward trajectory followed by ‘DAA’ which reveals the number of unique network addresses involved in transactions on a given day, could potentially indicate a sign of recovery, while highlighting reinstated faith among Ethereum hodlers in the midst of a crisis.

Along the same lines, the crypto-analytics firm, Santiment, tweeted,

“Simply put, this vital metric indicates the daily level of crowd interaction [or speculation] with a certain token. As we can see, there has been an impressive rise over the past week and a half with a large increase in transactions taking place on the ETH network, and daily active addresses”

The daily active addresses on Ethereum’s network spiked to nearly 395k on Saturday, 21 March. This kind of activity had not been seen since June 2019, a time when ETH prices touched an annual high of around $336. This was touted as a ‘positive development’ for the ecosystem since daily active address figures were hovering below the 250k range, for the most part, leading up to the ‘Black Thursday’ when the figures dropped close to 175k.

“..approaching 400,000 is a promising development for Ethereum’s mid/ long-term prospects”

The number of new addresses has also increased. According to Glassnode’s data, the number of non-zero new addresses surged to 92.741k on 21 March, a level not seen since 25 December 2019. The figures had risen to 80.654k when Ethereum’s price surged to $254 on 12 February. 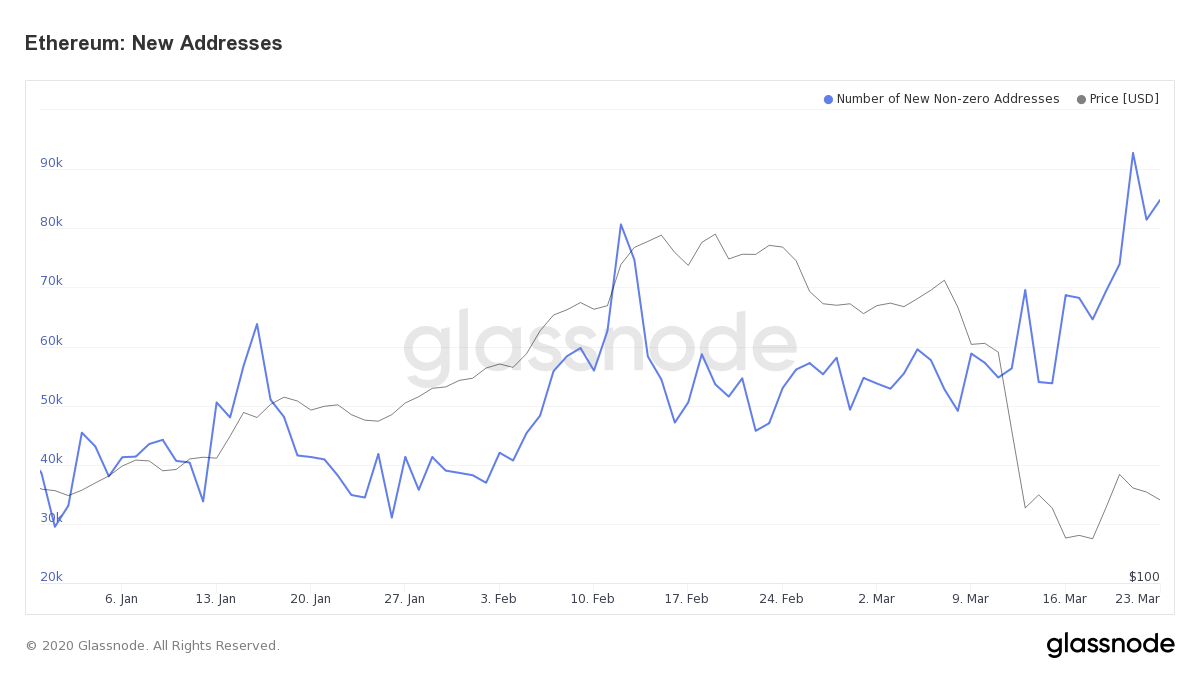 Despite the fall in Ethereum’s price, the number of active addresses as well as the new addresses in 2020 has continued to grow.  To top that, transaction count figures also exhibited an overall positive figure. The drop in transaction count was not observed until 15 March, a day when the figures fell to 657.653k from 847,947 two days earlier.

However, following this stint, the transaction count figures have also maintained an upward trend. As of 23 March, the figures stood at 801,238.