Dogecoin [DOGE]’s stellar performance over the past few weeks has been pushed back in the memories of users as the coin saw only a 0.34% hike over the past 7 days, a stark contrast compared to earlier bullish runs. At the time of writing, the Shiba Inu inspired cryptocurrency was trading at $0.0062 with a 24-hour drop of 0.85%.

According to CoinMarketCap, most of the Dogecoin’s trade volume was held by Gate.io, a Chinese cryptocurrency exchange. Gate.io held a trading volume of a whopping 29.85% with its closest competitor, BtcTrade.im holding just 12.02%. At press time, Dogecoin was enjoying a total market cap of $727.568 million. 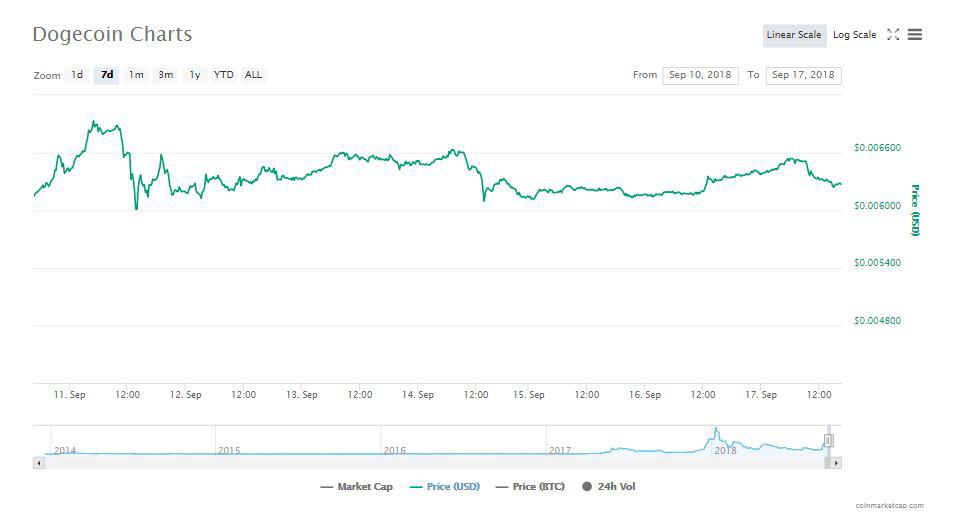 Dogecoin had risen to a stunning 121% on the first day of September, shattering market expectation and fulfilling Dogecoin holder price hike predictions. The cryptocurrency had risen from a slump of $0.0025 to a startling $0.0053, almost doubling its value index.

“Honestly I’d be happy if dogecoin hit 50 cents to 3 bucks this year in q4 when all the coins rise. And if it hit 20 next year. Then if it got between 30-100 four to five years from now.Honestly 20 bucks a coins is what I’m hoping for in the future.”

Alex Van De Sande, a member of the Ethereum Foundation had recently tweeted:

“The Dogethereum team is still working hard on the bounty, and now they will present work in order to reach a new milestone for 746 ether. All information is being made public beforehand so the public and the judges can make a decision”

Dogecoin has surpassed a lot of user expectations, with the cryptocurrency which had started off as a joke, even entering the top 20 cryptocurrency club last week. The temporary membership in the top 20 club came after a bullish spike that increased Dogecoin’s market cap to $670 million, surpassing that of ZCash’s $620 million.