When the towers in New York fell, I became obsessed with economics. I wanted to follow the money to understand what happened on that dreadful day. During that time of inquiry, I found myself very interested in Austrian economic theory. Soon enough, I realized that the reserve banking system was systemically corrupt. How can you have money based only on debt? How can central banks print debt out of nowhere and demand interest for that?

When the towers in New York fell, I became obsessed with economics. I wanted to follow the money to understand what happened on that dreadful day. During that time of inquiry, I found myself very interested in Austrian economic theory. Soon enough, I realized that the reserve banking system was systemically corrupt. How can you have money based only on debt? How can central banks print debt out of nowhere and demand interest for that?

It was a question that caused me to create the world’s first website where people swapped clothes online, in an attempt to enable people to stop using fiat debt certificates. I soon realized that swapping was a terrible way to trade. For instance, if Alice really likes a dress from Belinda but Belinda doesn’t like anything Alice has, then the deal falls through. That’s unfortunate. So then, how do I create a digital token that is used in the market so Alice could just pay Belinda a token for the dress that Belinda can trade with anyone else in the marketplace?

Hmm, I thought. But if I issue the website’s own internal currency then I’m back to central banking, back to one company deciding what’s good for the economy, inflation and everything else would be up to me.

We built Swapstyle as an alternative economy based on swapping, as a tool to get around fiat — not become a new fiat. The more I thought about swapping and alternative currencies, the more I realized that money needs to be decentralized with no controlling power — it needs to be released from a network. But this was impossible.

I read Adam Back’s HashCash and Nick Szabo’s bit gold papers. Europe and the Netherlands, in particular, had interesting pockets of innovation. These were people deep into cryptography; these were scientists with the same goals: to decentralize money in the internet age, an age that had us all in a dichotomy: It could free humanity or place it in digital bondage, control and servitude.

In late 2010, Satoshi’s white paper crossed my desk somehow. WOW, OMG! SHE SOLVED IT! This anonymous person has solved the double-spend problem in a decentralized network! I fell down a rabbit hole that frankly I’m still falling down and loving it. I incorporated bitcoin into SwapStyle in 2011 and none of the members knew what it was. I would send them to Gavin Andresen’s amazing faucet that was giving bitcoin away so people could try it. The Libertarian and anarchist roots were also really strong in the community so I gravitated toward reading more about the philosophies of Murray Rothbard, David Friedman and other great thinkers.

I moved to Germany in 2013 and founded Room 77, the first brick-and-mortar place in the world to accept bitcoin. The first time I arrived, I felt at home: There were pictures and quotes of Julian Assange and Aaron Swartz hanging on the wall, Bill Hicks playing in the restrooms and, at the bar, long conversations on philosophies of Friedrich Hayek, Murray Rothbard, Ludwig von Mises and many more.

These were the types of people that wanted to change money for a reason: for the sake of freedom and independence from the banking system or the system of control altogether. One guy I met there always wore a balaclava if there was a camera present, had tape on his fingertips and kept a small pebble in his shoe to throw off gait recognition patterns. I felt like he was more of a living art piece, warning the world of the Orwellian nightmare we, as a society, seemed to be blindly walking into because if anyone stuck out like a sore thumb, it was him.

During this time, there was a sense of building an exit door, a cloak to help fend off the encroaching Big Brother state. Germans have seen many governments go sour and Berlin was, of course, central in one of the largest, both during WW2 and then the East German Stasi during the Cold War. Wherever I went, the talk was about freedom, about liberty. The community was full of crazies, misfits and outliers with off-the-chart IQs.

The thing that we all knew, though, was that Bitcoin had arrived and it was an invention that could not be stopped and could not be taken down, and that this was the dawn of a new era, a total disruption in money and government as a whole. 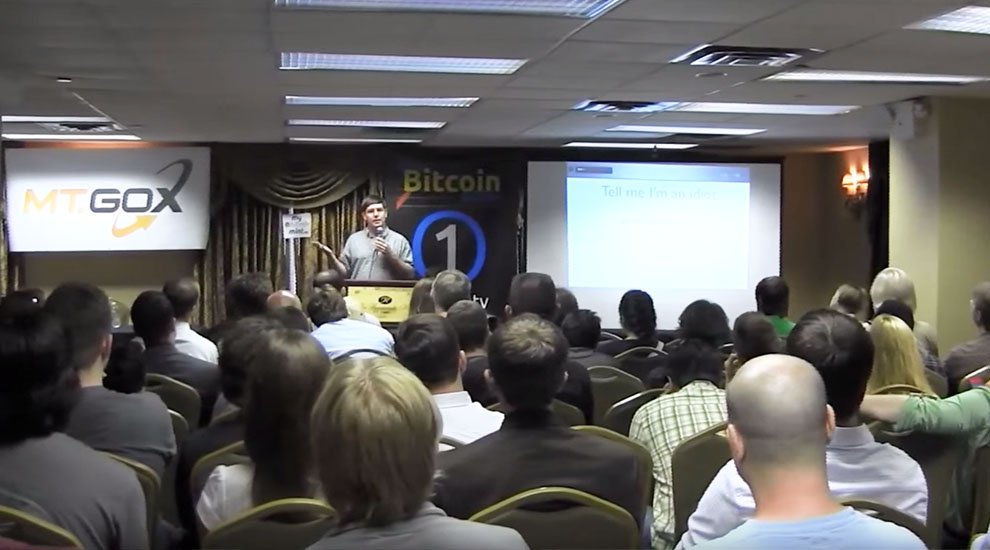 Nowadays, I speak at countless conferences. But these conferences are different. They are filled with bankers and regulators, with lawyers and scammers, promo girls, hookers, suits and Lambos. I always try to bring it back to the fundamentals and the reason why Bitcoin is so important. It seems that, since mainstream adoption has started, it’s been all about Lambos, hot girls and macho celebrations of mediocrity.

At the end of the day, it doesn’t matter who you are or where your politics sit. You will end up using crypto and being part of this network. Bitcoin and crypto act as a funnel and, in the end, everyone will fall through. So I’m happy that asset-based money like bitcoin (rare numbers) and gold (rare metals) are slipping back into society, and there is nothing anyone can do to change it. #ExitFiat

And then there are the ICOs. I love the concept of ICOs as I think they use an amazing mechanism for cool projects that have a small niche appeal to raise money without banks. They are able to get the community invested in the project’s success while outsourcing marketing to enthused token holders wanting a higher price.

But as we all know ICOs are fraught with scammers, bamboozling people with techno jargon and lofty investment return promises. Usually, all they have is a nice website and a white paper. These kinds of things will change as people learn from getting burned. We at Vaultoro have stayed away from launching a Vaultoro ICO. I didn’t want our good name to be associated with all the hype and scammers. This latest bear market, however, has really flushed out the swamp, allowing solid strong projects like Vaultoro to maybe think about raising from our community through a token.

I think the next 10 years will be interesting, as humanity deals with human obsolescence in the workforce. As machines join the economy. As money starts being digital tokens representing anything from company shares to deeds to buildings earning auto dividends. As you pay Uber with bitcoin and it automatically trades in a decentralized exchange to ubercoin. When the driver receives their ubercoin, they can trade for any currency they want, including gold, or stay invested in Uber’s success by hodling the coin.

These are the most evolutionary times in economics that we have ever seen. I’m excited to watch it unfold and hopefully see more people stay free.