Despite Bitcoin’s trust with booms, busts, wild price swings, and scams, the coin has come a long way and is today, no more considered overhyped. But, there was a time when its value was questioned. What triggered this change in perspective? 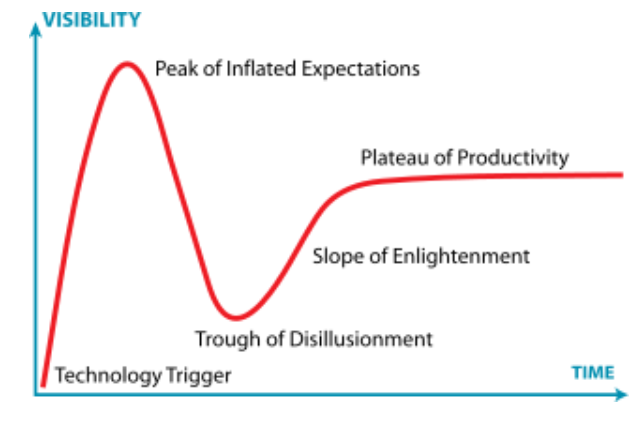 The adoption of Bitcoin so far has been in the shape of an S-curve of technological adoption. The S-curve here, is essentially consistent with repetitive hype cycles, with the first being dominated by cryptographers and cypherpunks. The second hype cycle attracted libertarians who stressed on financial freedom and so on.  Bitcoin is now on the slope of enlightenment, as depicted by Gartner Hype Cycle, for emerging technologies. And while many people will dismiss this, the fact is that hype and bubbles have played a crucial role in positioning Bitcoin today.

Historically, the nature of Bitcoin investment has been mostly speculative, something that is driven by hype. These hype cycles have been known to form multiple bubbles in the price of Bitcoin. In fact, according to a recent study, these hype-cycles are built into the design of the protocol itself. While analyzing the role of speculative bubbles in the process of Bitcoin’s technological adoption, a study titled ‘Boom, Bust, and Bitcoin: Bitcoin-Bubbles As Innovation Accelerators‘ found that,

“The deflationary nature of the cryptocurrency’s supply and halving of block-rewards have triggered a process of what can be called speculative technology adoption. The resulting hierarchical sequence of repeating and super-exponentially increasing series of bubbles, which have occurred over the past decade since Bitcoin’s inception, has resulted in new waves of speculative adopters.”

These speculative bubbles and hype-cycles have “bootstrapped the Bitcoin network into existence.” While financial bubbles have triggered the diffusion of technological revolutions in the past, this was not the case with Bitcoin. Rather, the study stated that Bitcoin is the first-ever technological innovation in which its price bubbles essentially comprise of necessary components in the process of technology adoption and diffusion, adding that the emergence of bubbles and hype cycles that bolster the technological adoption of the coin is “hard-coded” into its protocol. It also said,

“In order to be successful, future technological innovations, we suggest, will thus need to incubate and generate comparable visions, enthusiasm, and hype, which are currently fueling the dynamics of Bitcoin’s development and diffusion.”