Is Bitcoin a more deserving candidate for ‘safe-haven’ asset than Gold? Bitcoin’s shrinking value in the market has expanded to the rest of the market, with the gold proponent, Peter Schiff, back at taking potshots at the digital asset. In fact, Schiff was in the limelight after he once again disagreed with the claim that Bitcoin had outperformed gold as a ‘safe haven’ and ‘store of value.’

Bitcoin has been having a tough week as the selling pressure increases, and the coin is once again back to $8k level. Even though the traders on the outlines may consider this dip as an opportunity, Schiff had claimed that,

“Bitcoin hasn’t been around long enough to prove anything other than P.T Barnum right. There’s a sucker born every minute and many of them own Bitcoin.”

The status of Bitcoin as a safe haven has been questioned time and again and according to Arcane’s latest blog, the largest cryptocurrency is not a safe haven as it reacts to global instability. The CEO of Arcane Research, Torbjørn Bull Jenssen, and analyst, Bendik Norheim Schei, in their recent post stated,

“No, Bitcoin is not a safe haven because it goes up when there is global instability. It is because of its two unique properties.”

The duo also claimed that Bitcoin’s uncorrelation with all other asset classes and censorship-resistance made it a safe-haven asset.

According to a report, Bitcoin and gold both have been reporting a positive RoI, and the latter has reached a high last witnessed seven years ago with a YTD of 11.51%. The divergence between Bitcoin and S&P 500 is visible in the chart below. 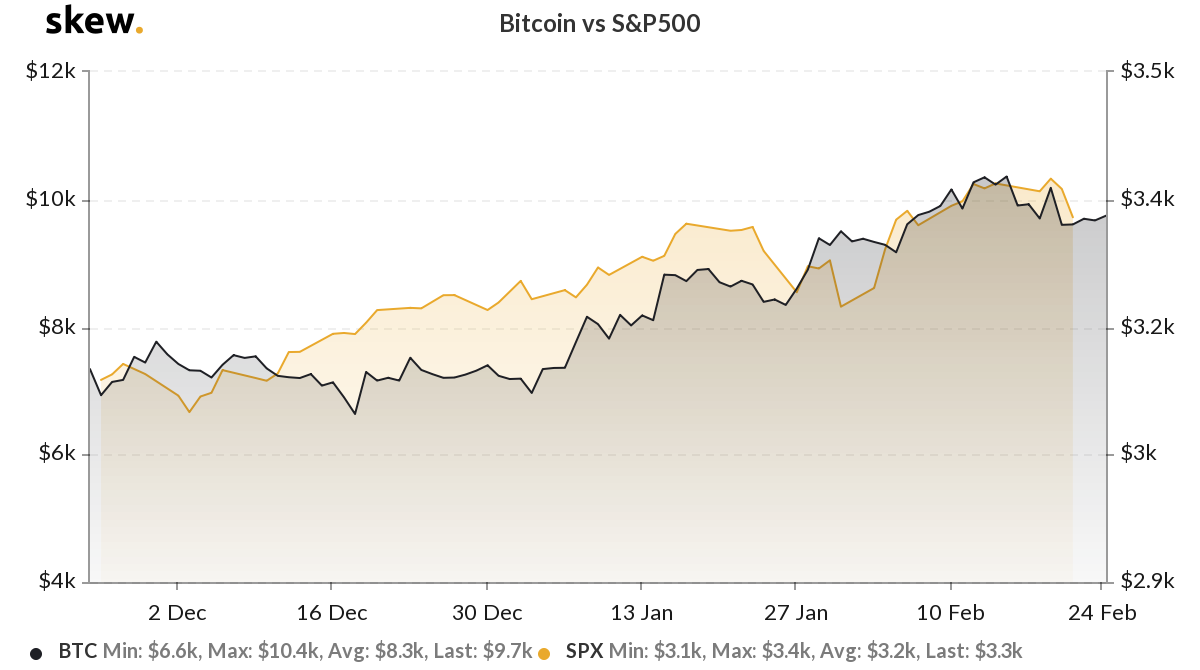 However, even though Bitcoin was initially growing, as opposed to the stock market, the recent performance of Bitcoin has been in line with the falling stock market, while gold prices still climb. The report claimed,

For an asset to be marked as a safe haven, low correlation isn’t the only criterion. The other things that matter are liquidity, confiscation-and censorship resistance, and low credit risk.

Taking the example of the 2008 economic fiasco, the researchers claimed that the deficiencies showcased during the time are something that keeps Bitcoin apart. A user can buy Bitcoin that represents the same value as the market price without uncertainty about what is underlying it. Despite some flaws, Bitcoin outperformed gold in various properties like being available in any part of the world and not just in a country’s locker. The researchers concluded,

“At the end of the day, it doesn’t matter if the price of bitcoin goes up when the fear for a global epidemic is spreading and stock markets are crashing downwards. What matters is that bitcoin keeps providing confiscation and censorship resistance, while building liquidity and maintaining its uncorrelated property. This is what really makes it a safe haven.”