A copy clone of Uniswap, but with a token, is the latest to grab everyone’s attention, including that of these pages which finally got around to seeing what this farming is.

First, SushiSwap has come up with the idea of basically ‘stealing’ Uniswap’s liquidity through a plan they lay out as follows:

“After the first 100000 blocks from the protocol’s inception (~2 weeks), we will be migrating all the liquidity tokens staked onto SushiSwap contracts.

This migration will involve taking all of the Uniswap LP tokens staked on SushiSwap, redeeming them on Uniswap for the respective token pairs, and initializing new liquidity pools from those tokens.

These new pools will be almost identical to the standard Uniswap pool, with the added feature that any fees accrued will be distributed to SUSHI token holders through the logic outlined above.”

As much of this is new, you probably have no clue what they talking about, so let’s start first with the Uniswap underground.

As you know by now, you can swap tokens here, but also can provide token liquidity by sending them into a pool.

After you click pool on their interface, we’ve added the liquidity pairs that in this case are eth and sushi. 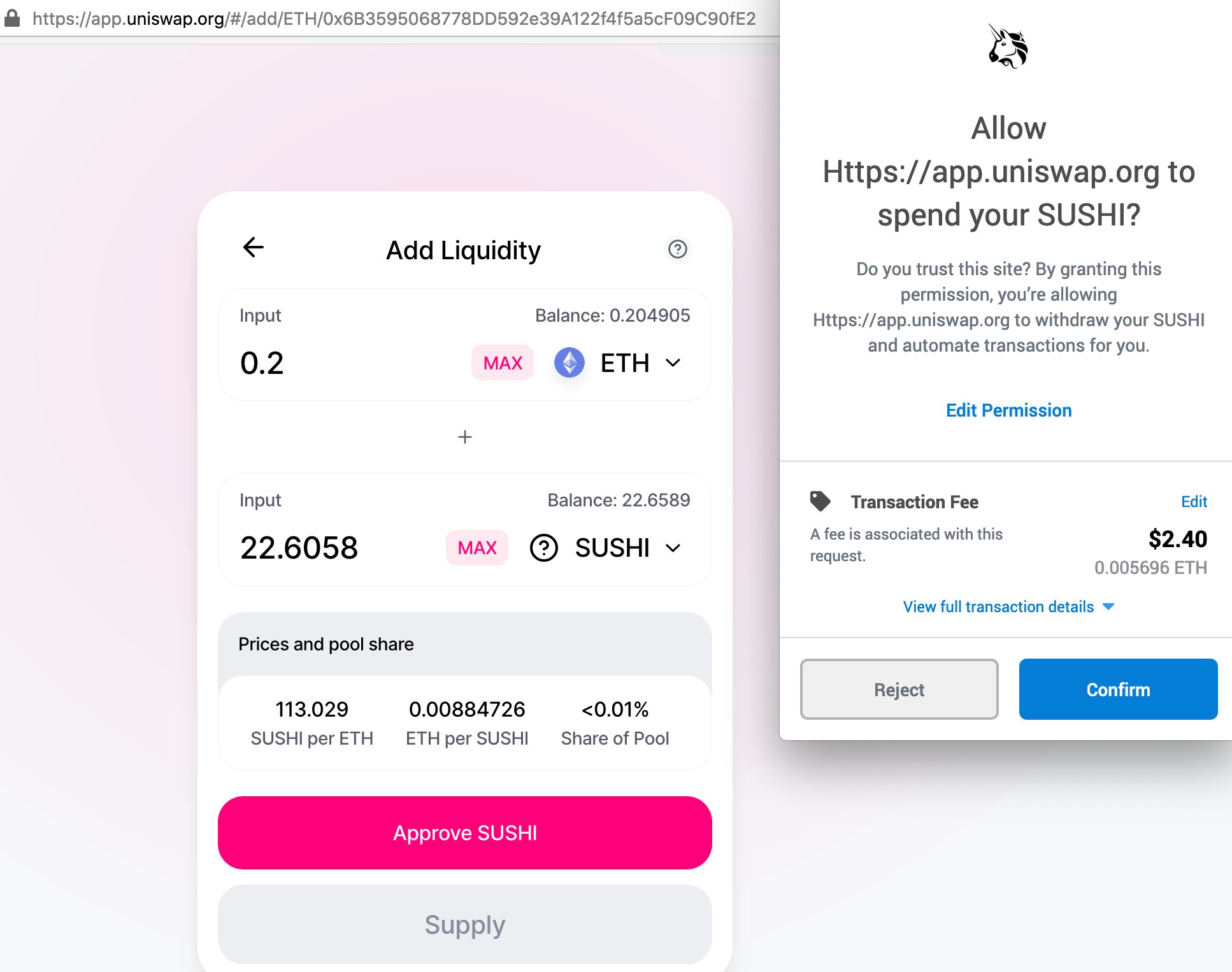 We have to approve Sushi first, and that’s an onchain transactions. Above it says $2.40 but we had to speed it up as it was taking forever, so we paid about $5 and that’s to approve.

Then you click on supply, and what happens now is interesting because both our assets have gone from MetaMask.

What we get in return is a Uniswap liquidity token, called just uni-v2, with this looking like any other token. 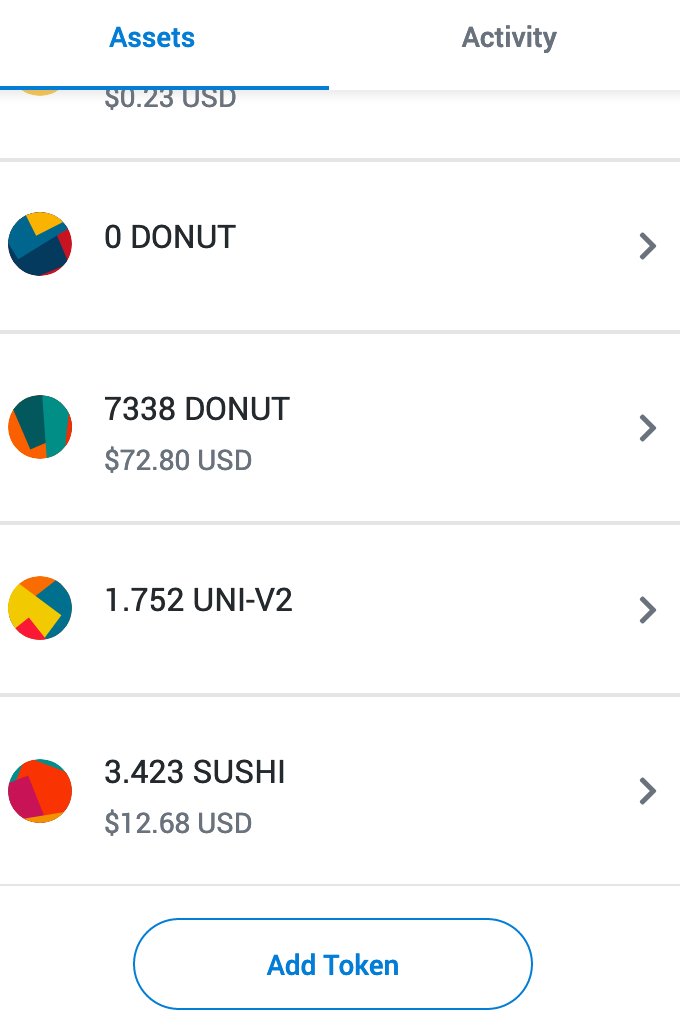 We had no clue what we were doing as its our first test-run of the sort, so some Sushis are just sitting there, a mistake that’s ‘costing’ us $1.2 a day.

Anyway this Uniswap token now goes to Sushi, you just click stake as shown in the featured image, and that’s that after a transaction of course. 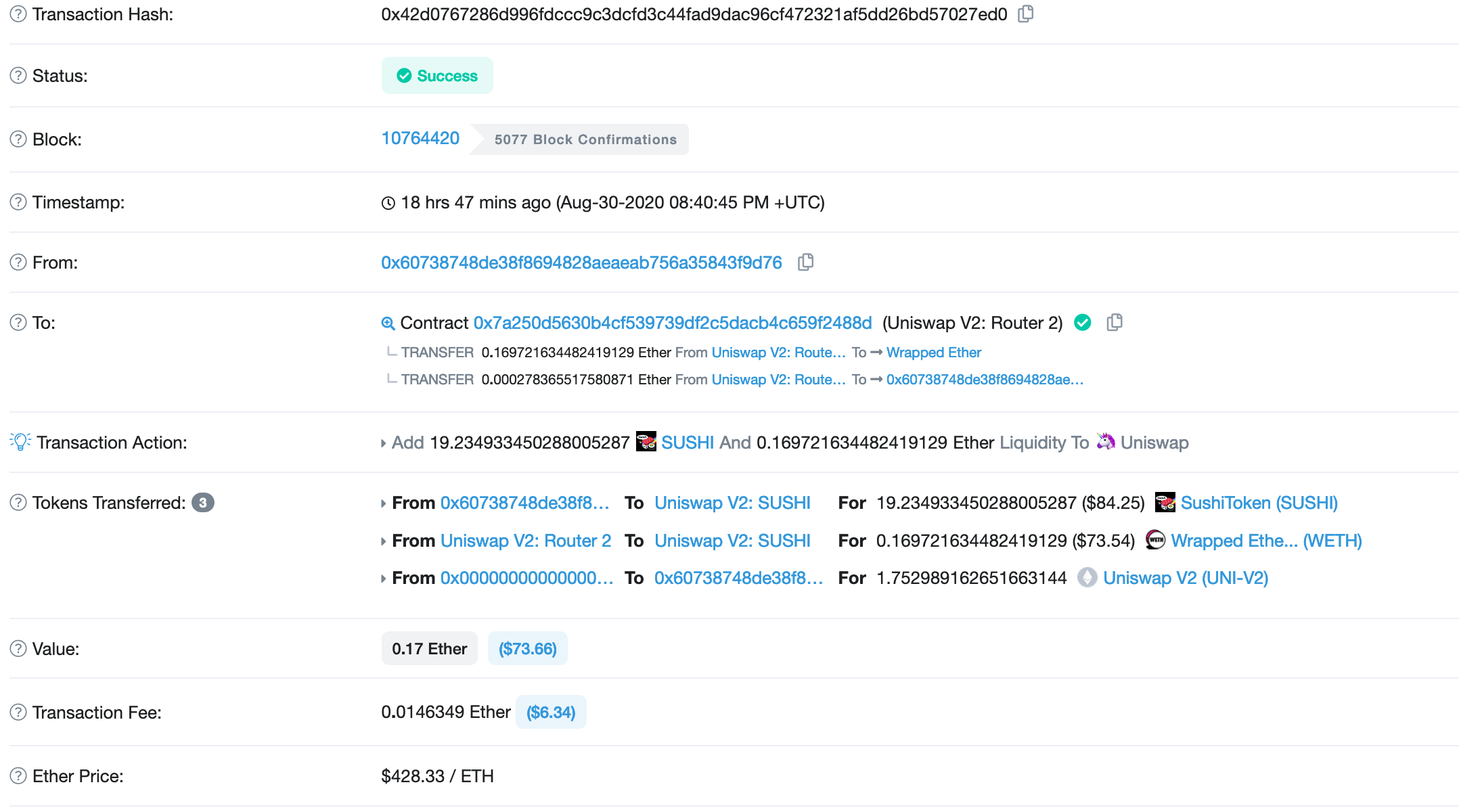 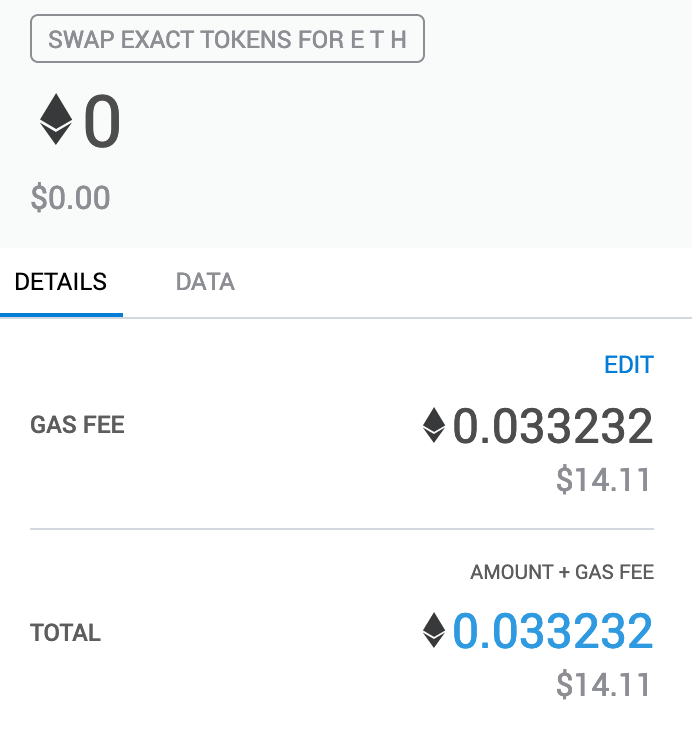 What you’ll notice on the featured image as well is this harvest button. We clicked it when we had 0.002 Sushi because harvest in our mind came out as work the land and farm it, when obviously harvesting is getting the grapes and putting them in your pocket, or in this case the Sushis.

So you don’t want to click that until you’re done because otherwise you’re just wasting money on fees as the number just goes back to zero because you collected the sushis and then it starts moving again.

What you can’t see in the featured image is this feeling you get when those Sushi numbers start moving and they move fairly fast.

We’ve put down just 22 Sushi tokens as you can see above, and less than 24 hours later, we have close to 2 sushis as can be seen in the featured image.

So this is running at about 10% a day with the amount of tokens distributed for the first two weeks boosted by 10x because they want as much liquidity as possible.

So maybe you now understand what they talking about in the bit we quoted. Once this two weeks period ends and if we still have this Uniswap token in there, they will send it back to Uniswap to redeem it for the 0.2 eth and 22 Sushis.

That eth and sushi then becomes a pool on sushiswap, and therefore this brand new dapp gets to bootstrap and very nicely.

There is something very new here and we’re calling it a work token because this sushi we’re getting is very hard at work for its maker.

When we first looked at those moving numbers on the screen we naturally wondered is this just pointless numbers, a ponzi game of sort, or is this more a new, perhaps more equitable method, of distributing a new work token.

Work token because this will be what can be called a power unit of measurement when it comes to the fairly difficult work of governance which will be adjudicated by the token.

So what we have is basically an airdrop because we’re getting these new tokens fully for free. Yet instead of lazy airdrops where everyone that has eth gets X token, here you have to ‘work’ to be eligible, you have to do all these on-chain transactions.

That’s the surface. We didn’t have Sushi and we could have used one of the other pools to get them, but the sushi one gives a lot more in return, altho UMA today seems to be even higher. 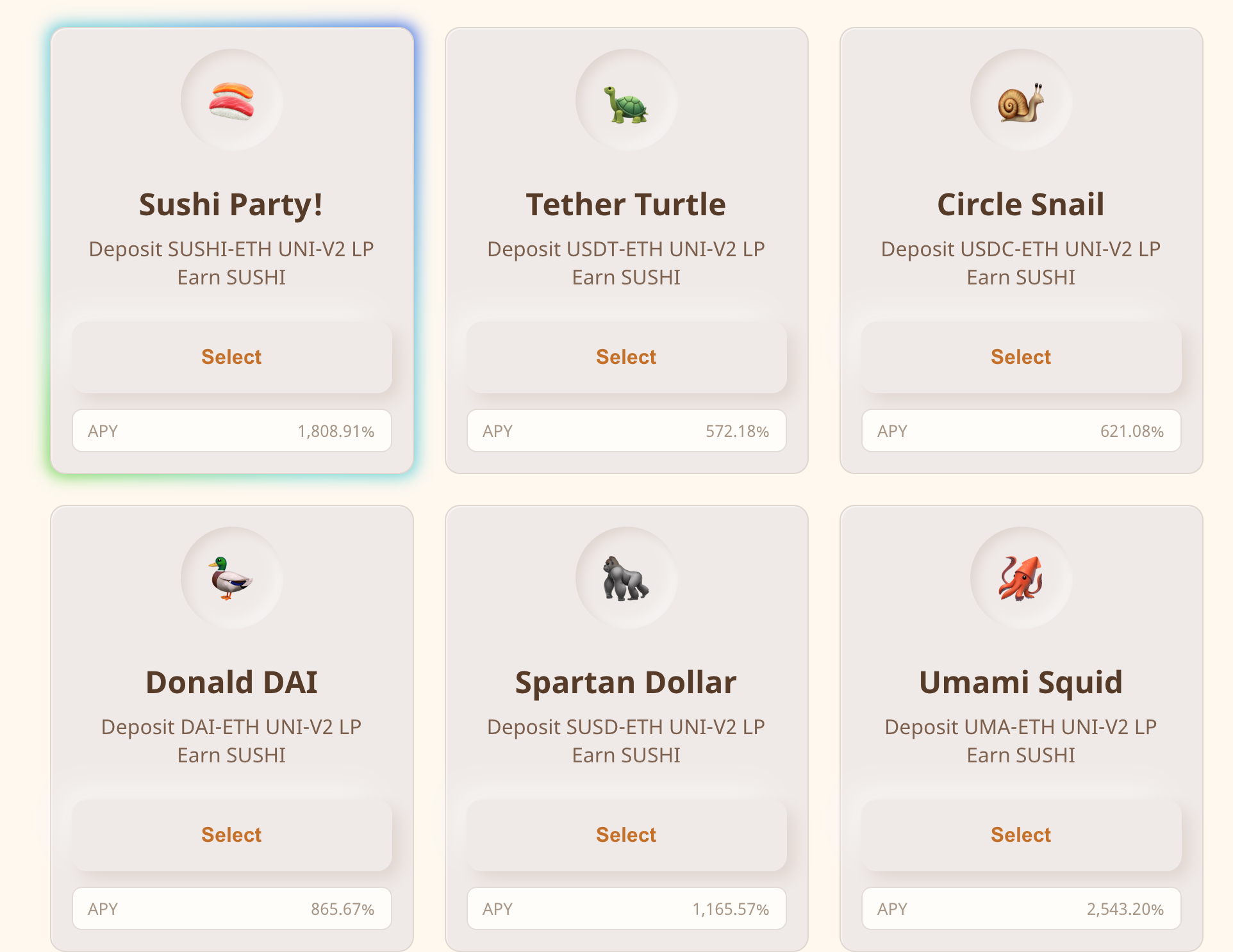 So we had to buy sushi, and that obviously puts demand into the supply equation, and so we have this token rising even as supply is increasing but market cap is still at just $90 million.

So bringing us to the different underground, to what we could call code politics.

Uniswap is a frozen contract, so you can’t just update it to insert a token for governance, something that plenty of ethereans probably saw as a missed opportunity.

So this token version was to be expected really, but it is literally a copy clone and it comes just days after Uniswap raised millions from Venture Capitalists.

So opening many ethical angles here. The sushi boys say F VCs, and plenty would agree open commons should be owned commonly.

We’ve seen what VCs have done to Google and Facebook and many other beautiful companies that have been destroyed through the VC’s thirst for monopolization and total power.

On the other hand the Uniswapers can quite rightly complain about their work just taken from them, which could have complications for the open space because they could well put copyright notices on the code.

Not that the Chinese or the Russians or anon would care about that notice, and since Uniswap depends on the wider contract ecosystem, it’s probably unlikely they would be able to just hide the code without significantly hurting the entire mondus operandi of their dapp.

So, testrun or not we do now have sushi and maybe we’re a bit biased, but if all else is ignored, this is bringing much needed competition to the dapps space which can only be good certainly for the end user, but also for the entire ecosystem.

As we showed above, we had to make numerous on-chain transactions before finally getting to see those moving numbers.

As the above screenshot shows, Sushi is no better because it’s there where one of our transaction failed at the cost of $7, with our test account minus probably around $40 in total thanks to fees.

Without much competition neither uni nor sushi have too much of an incentive to improve as much as possible so as to have a business at all.

With competition, however, people have choice. And therefore you’d expect one of them to reduce soon the requirements for on-chain transactions, in addition to both having significant incentives to innovate so as to keep up.

That’s especially the case for sushi which is keeping 10% of the tokens for the devs as if someone forks it and removes that 10%, the devs really have to show what value they’re giving for that 10%.

Making this open space a bit ruthless really, and since it’s been quite some time since we’ve seen ruthless competition, obviously limited to code or words only, then it’s about time we see it. So may the best win.