Stocks and cryptos are down today with Nasdaq in particular losing some 5% following a stratospheric rise.

The $2.3 trillion Apple lost about 2% while Tesla went minus 5% with Shopify and other likewise tech stocks also falling. 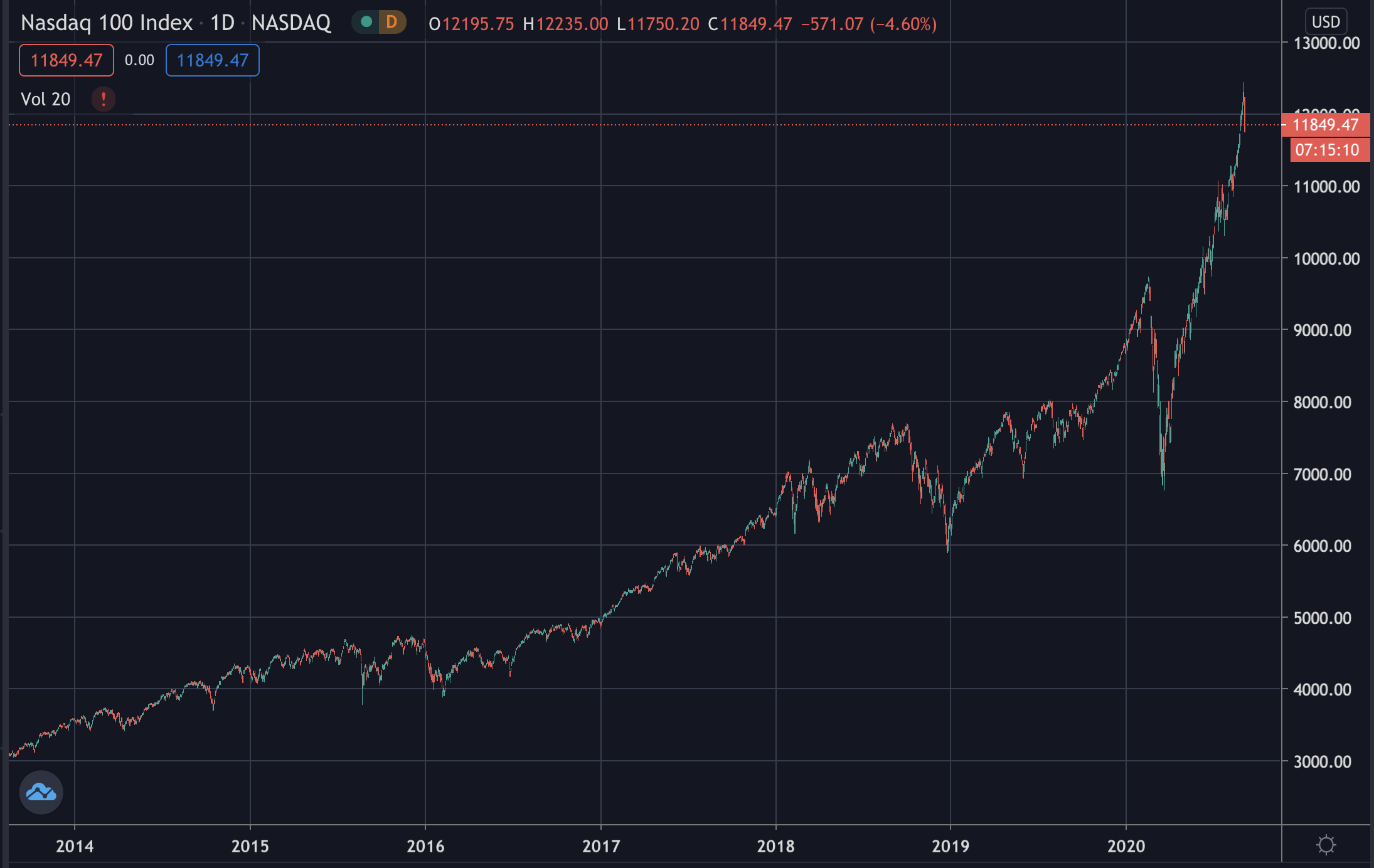 You can just about see the relatively big red candle on the daily with Nasdaq experiencing one of the biggest bull run in history.

The March crash looks like the biggest, but the recovery has been so swift with the index hitting new highs.

Just what direction this will take now is to be seen, but for today, cryptos are down as well.

What triggered this is not too clear with it potentially just a correction, but bitcoin for once can feel a bit relevant as they appear to be leading.

Almost all cryptos are down however, and the reason it may be coinciding with a fall in stocks is probably because the two main cryptos are now more and more finding their way to traditional investment portfolios.

While for stocks, the government machinery has finally changed its attention to the economy and as you’d expect, they ain’t saying any nice things.

“Rishi Sunak’s leaked notes reveal tax rises ARE on the way,” shouts The Sun. “Bank of England warns of ‘scarring’ to the UK economy,” says City AM. “Brazilian economy is back to 2009 size, following a 11,4% contraction in the second quarter,” says Brazilian local press.

You get the picture. The narrative has changed. It’s not rarona that is scary now. You can imagine Boris: ‘we gota be tuff or inflation phew phew yer muneh.’

You pay now peasants for the pleasure of your three months house arrest holiday. And you can be sure this time they won’t target the 9-5 PAYEs who got their luxury imprisonment covered fully. Nah, socialism is selective while claiming all equal. When it comes to taxes however, equality stops at: whos your vote base ‘doners.’

Inflation is expected to rise as well so we know the answer to who are the ‘doners’ with Trump blaming polls for the Nasdaq fall.

“Do you notice that any time Fake News Suppression Polls are put out, likeFox News, the Stock Market goes DOWN. We are going to WIN!” – Das presidentes.

Watching videos of riots there from here in Europe, you do wonder what is going on in the land of the brave, and all of it like clockwork.

Is it time to pay banks the dues after a ten year bull run, we asked in November 2019. Well, we hoped the usual law of headlines would apply, but they’ve gone for ‘hit them with a pandemic’ instead.

So what does this mean? Well, the usual. Banks are gone say you taken too much debt so pay up evrifin now. Gov gone say taxes taxes or banks no atm. Some peasants are gone protest for a day or two or sit in some square for a month. Some court is gone kick them out. The media is gone ensure we know about how bad everything is and how helpless, ooo how awful for you, and do so everyday. Then someone looks at the data and says: wait, we are booming? Repeat.

And the solution? Well, chain the bankers’ lakeys by giving some jury house law and policy making authority.

Putin announces he won some referendum to self-declare himself diktata for life by 80% on 100% turnout and we say: pfff obvs fake like wat haha.

Who asked how can he lie but ours can’t? Are the Russian people aliens? Are we some sort of god ingrained species that despite using the same system can’t be told 48% to 52% for whoever the vote announcer pleases.

But we have systems! We have checks! But we are a DEMOCRACY! Bullshit. Demo means the people. Look at your parliament or congress, look at the leaders of major economies, who is ‘the people.’

Oh yeah, forgot that bit. There’s also someone like these pages reeeing about ‘them,’ but usually with just the ree bit.

This time there may be a solution however, and it’s not ours. It’s from the French who rose last year to demand a jury house, a random selection from all adult citizens to number maybe 300 and so potentially represent the country far better than easily gamed ‘elections.’

They protested in France for almost a year for it, and they re-started their protest in January of this year, which so happens to coincide with the pandemic.

Can you imagine what would happen if there is indeed a law making jury house? Wouldn’t they ask why is Bezo’s inheritance tax rate the same as for those that have a net worth of $1 million? How come his ex wife paid almost no taxes despite getting crazy billions for ‘free’ from everyone that uses or is used by Amazon?

As much as we like Musky, wouldn’t they ask how come he pays the same capital gains tax rate on $70 billion as some kid gaining $10,000?

Wouldn’t this jury house have requested a proper investigation into the Imperial University College and it’s unnatural fear-mongering through ‘leaking’ estimates that claimed more than 10% of all Brits would be gone by this ‘pandemic’ unless house arrest for all?

Could have there been an Iraq War if there was such jury house which most certainly would have said no?

Would the banks bailout have been so one sided? Would SEC have dares tell this space in its face ‘we won’t innovate for you’?

Nothing changes some say but if that was the case we would still be monkeys. Things do change. And we are at a point where so many are and have been affected in so many ways by the government’s disdain for its own people which has clearly sparked fierce protests across the globe for now nearly two years.

It is not the strongest that survives or the most intelligent, but the ones most adaptable to change, and the air of change has been whistling for months.

So now they open a new conversation. Fear poverty you peasants and pay up. And also, reee this other country, be scared.

Ambition, advancement, peace and prosperity, is terror to them for then either they’d have to actually compete, instead of securing their positions through a rigged law enforced aristocracy, or they’d be irrelevant and we wouldn’t care if Bill Clinton did or did not have some pleasure time in Trump’s table.

Hence Chyna is bad, or Russia is bad, or muslims are bad, or nowadays even the air is bad. The only good guys are these swindlers whose ancestors sent our grandfathers to the trenches and nowadays for two decades keep telling us about how we should just tremble instead of demand silly stupid flying cars.