While the ETH blockchain is making a name for itself in the financial landscape, Anthony Pompliano, Co-founder of Morgan Creek Digital, thinks otherwise, going on to dismiss this narrative.

“ETH is Money” is fundamentally flawed

Discussing the “ETH is money” narrative on his Off the Chain blog post, Pompliano claimed the idea behind the concept is fundamentally flawed. He argued that Ethereum is no different than a fiat currency, emphasizing that just like fiat, ETH has no fixed supply.

According to the co-founder, Ethereum has an inflationary supply schedule and its monetary policies are determined by a small group of individuals, something that completely mirrored the functionality of fiat currencies. He added, 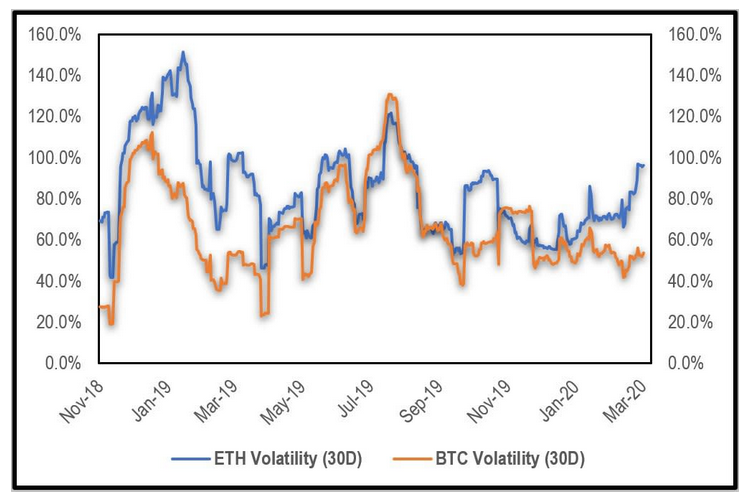 Pompliano also suggested that historically, Ethereum has been more volatile than Bitcoin over the past 15 months, as observed in the chart above.

His argument held considerable weight as assets like Bitcoin and Gold have had a limited supply over a longer time frame. Bitcoin’s monetary policy also hasn’t changed or deviated from its original design, but Ethereum has had a history of tweaks and alterations to its new issuance protocols.

On the contrary, Ryan Sean Adam’s recent bankless newsletter had argued that Ethereum will sustain a sound monetary value over time because of the fact that its progress will be engineered over a period of time.

Ethereum’s DeFi apps are beginning to find a product/market fit in the ETH ecosystem and this application will utilize ETH as money. The newsletter claimed that the $1 billion locked in DeFi implied that the community is rallying behind Ethereum and allowing ETH to achieve more monetary credentials.

DeFi has a future

“My general position is that the mechanics of the decentralized finance services will eventually be built around truly sound money (Bitcoin) and I am actively looking for teams to fund in that arena.”