The Decentralized Finance [DeFi] market, having over $1 billion in TVL across DeFi applications in February, was hit significantly by the market crash of 12-13th March. In fact, at the time of writing, this figure had fallen to $673.7 million. Even one of DeFi’s leading platforms, MakerDAO, was hit significantly by the market crash. As Ethereum’s price was slashed by almost 22%, DeFi loan liquidations worth $5 million were triggered. Ever since then, the outstanding debt on the platform has been declining.

According to Arcane research, the outstanding debt on DeFi fell sharply, and accounted for $133.6 million. Maker’s Total Value Locked [USD] had reached $310.467 million on 13 March, but later bounced back to recover. On 3 April, the TVL [USD] reached $356.479 million. At the time of writing, the platform was still dominating the DeFi-space, accounting for 75.8% of the total volume of the total outstanding debt. 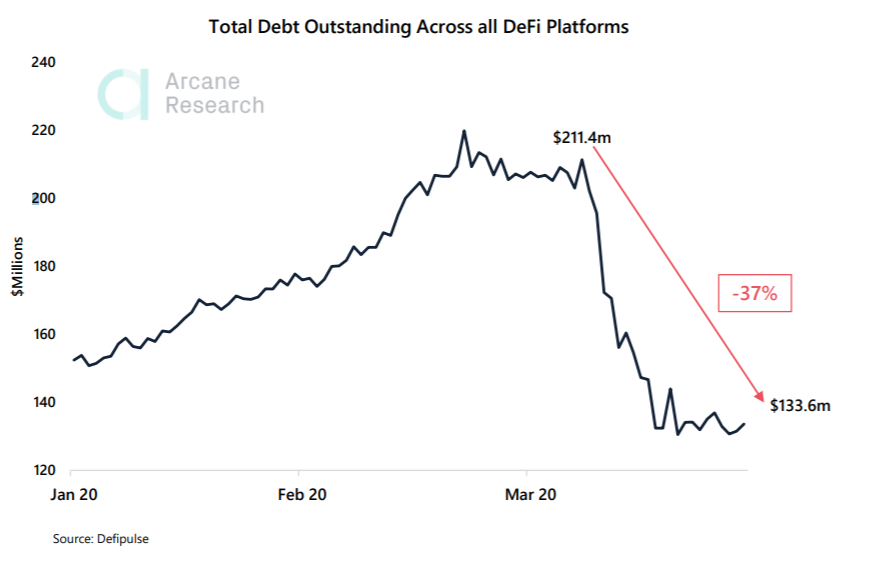 According to the study, every major centralized lending platform, including Gemini, Celsius, BlockFi, and Nexo, now had more loans outstanding than all of DeFi combined. Due to the custodial lending platforms’ inconsistency in reporting their numbers and the lack of on-chain verification, it is difficult to ascertain the actual and accurate value, however.

That being said, Genisis in its Q4 report, had announced that they had $545 million in active loans outstanding. BlockFI issued similar numbers during its series B funding round, announcing that it held over $650 million in deposits.

After comparing the share of the lending market for DeFi platforms to the decentralized exchange’s shares of the exchange market, it can be noted that DeFi lending has been the most widespread application of DeFi so far. At press time, 2.845 million ETH were locked across DeFi platforms, according to DeFi Pulse.