Popular digital asset trading platform Bitfinex has announced the launch of a proprietary surveillance tool as a measure to fight market abuse and to help promote orderly trading on the exchange. In an attempt to enhance market integrity and visibility, Bitfinex has deployed the market alert and reporting tool dubbed ‘Shimmer,’ a tool that will essentially identify and probe potential manipulative behaviors and report suspicious trading practices on the platform.

According to the official press release shared with AMBCrypto, this tool has been designed to operate with the platform’s distributed, multi-threaded and multi-process matching engine – Hive. Following the development, Paolo Ardoino, CTO at Bitfinex, said that “comprehensive market and trade surveillance capabilities are integral,”  when it comes to operating a leading cryptocurrency platform. He added,

“To meet the complex needs of an evolving digital asset class and to protect our sophisticated participants, Bitfinex has chosen to develop its own state-of-the-art surveillance system. This will help to assure that potentially manipulative practices are rooted out and suspicious behavior detected.”

According to Ardoino, Shimmer, which leverages the Rust programming language to process voluminous trade and order data at a high-speed, is relevant for Bitfinex’s Futures and margin funding products.

The Seychelles-based cryptocurrency derivatives platform may also be reportedly considering the implementation of KYC on its platform, something inferred from the fact that it’s on the lookout for an AML Operations Manager in Hong Kong.

Outright larceny and money laundering have been quite common in the nascent space of cryptocurrencies. However, as more institutional support continued to pour in, market leaders have realized the need to combat malicious actors who find loopholes in the existing infrastructure. Various players have come forward with mechanisms to identify and eliminate suspicious activities on their platforms.

More recently, blockchain analysis firm Chainalysis‘s report caused a stir in the community. The data curated by the firm revealed that $2.8 billion in illicit Bitcoin were traced to leading crypto-exchanges over the course of 2019, of which 27.5% went to Binance and 24.7% went to Huobi. To top that, more than 300,000 individual accounts at these exchanges received Bitcoin from criminal sources.

The study also determined that over the counter or OTC brokers were essentially driving this activity since KYC procedures, regulations established by the cryptocurrency exchanges, are limited in the case of OTC desks.

According to CipherTrace’s anti-money laundering report for Q4 2019, as compared to the previous year, cryptocurrency user and investor losses due to fraud and misappropriation in 2019 increased by an astounding 533%. On the other hand, hacks and thefts declined by 66%. Additionally, in 2019, losses originating from fraud and misappropriation of funds, along with $370.7 million in exchange thefts and hacks, summed up to $4.5 billion. 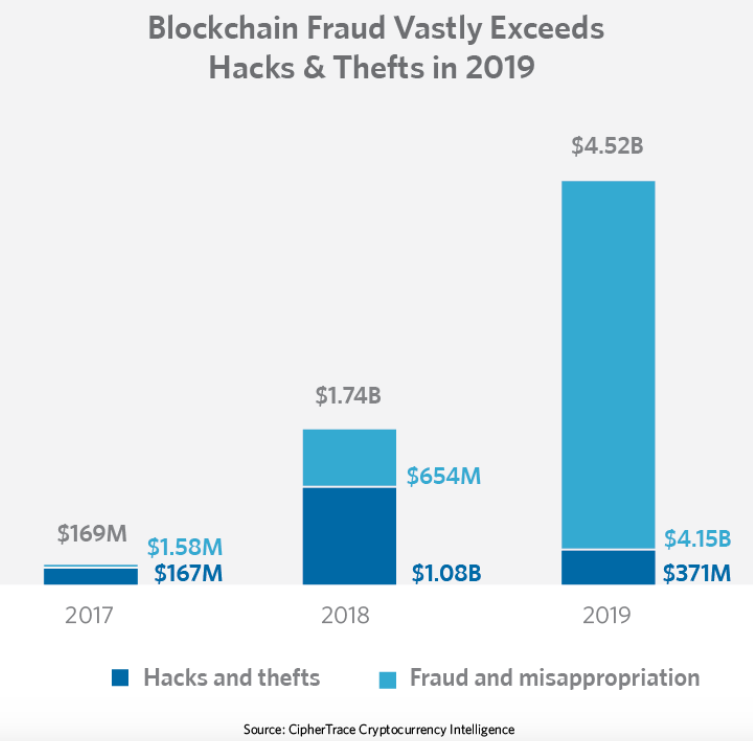