Bitcoin’s 0.97 correlation index is nothing new for Ethereum There are quite a few factors that influence the growth and consolidation of the digital asset industry. Whether it is institutional involvement or popular market sentiment or even a political event, the market has shown a tendency to be affected by a host of variables.

However, recent data suggests that the contributory factors to the present state of the crypto-market can be counted down to just one – Bitcoin, in light of the fact that a majority of the top altcoins seemed dependent on the king coin, at the time of writing.

The attached chart illustrated the correlation factor of Bitcoin, with the rest of the top major crypto-assets. According to the same, it can be observed that the correlation between Bitcoin and other crypto-assets over the past month has been substantially high. In fact, the correlation of BTC with ETH, XRP, BCH, and LTC was 0.97, 0.96, 0.97 and 0.95, respectively, at press time.

This finding highlights the fact that any movement in Bitcoin’s market will directly and immediately facilitate a change in other altcoins’ market as well. 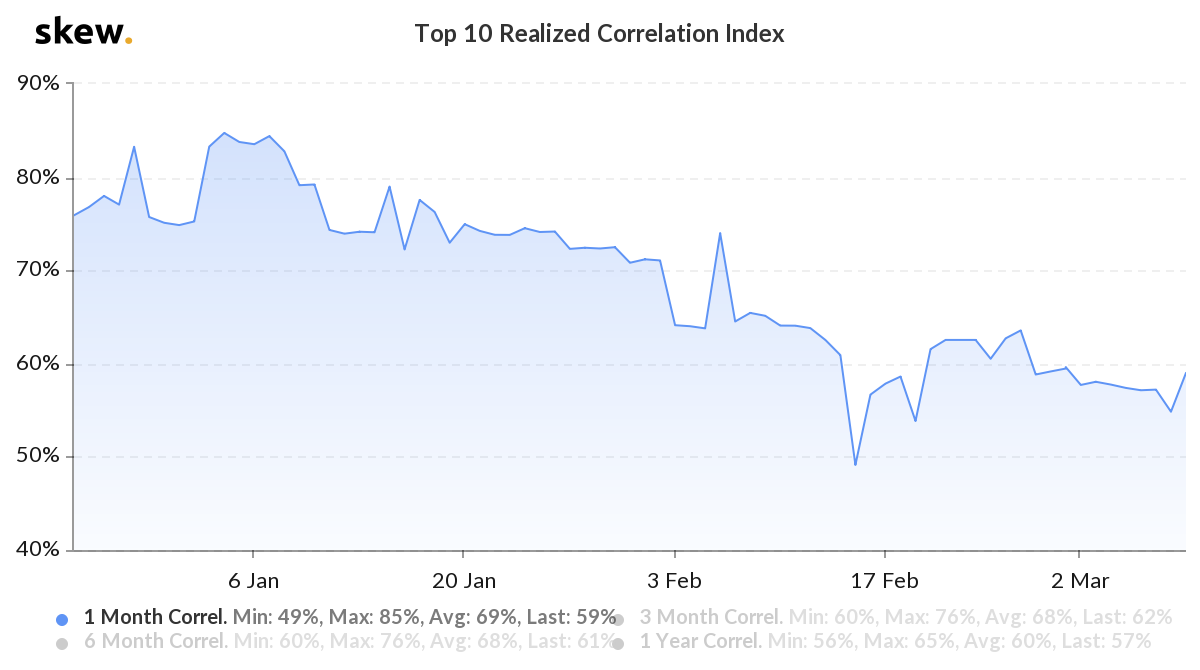 The realized correlation of the top 10 assets also underwent a hike over the past few weeks after the collective crypto-industry noted a dump recently.

However, such observations have been made in the past as well.

According to a two-year analysis by Skew in November 2019, Ethereum, the world’s largest altcoin, exhibited an average correlation of over 0.9. Here, it should be noted that Skew’s analysis took into consideration the bull run of 2017, a time when the BTC-ETH correlation was high as well.

In fact, over the years, it has been noticed that the spike in question was significantly high during times of bearish pullback in the market. 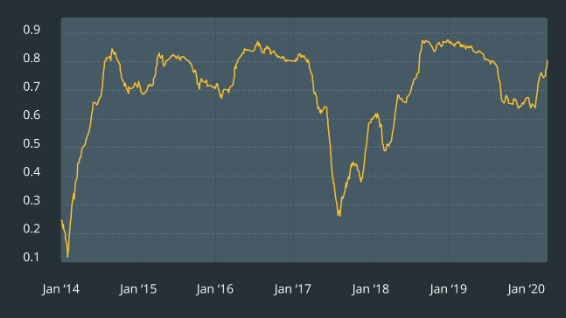 From the attached chart, it can be identified that the correlation between Bitcoin and Ethereum dropped when stability was attained in mid-2017. However, the index spiked exponentially during the bull rally of 2017, with immediate corrections following the same in January 2018.

A similar scenario is being seen today as after the decline on 12 March, the correlation index spiked.

It can thus be inferred that dependency on Bitcoin is fairly high, especially when there is a shortage of liquidity in the market. This isn’t unusual, however, as the market, at the time of writing, was dealing with a lack of momentum and hence, other crypto-assets were looking up to Bitcoin to drive the price higher due to its inherent market dominance.