Wrapped Bitcoin aka WBTC is a way of getting Bitcoin on Ethereum, where WBTC is pegged 1:1 with BTC. This is supposedly the future of cryptocurrencies – cross-chain compatibility. WBTC is one such project working to get the Bitcoin ecosystem [liquidity], or at least a part of it, to ETH. Since the Ethereum chain consists of a plethora of projects, WBTC could directly act as a portal between the two.

On 3 May, the Maker Governance had held a vote that decided to use WBTC as collateral to generate Dai. This vote came after considering the pros and cons since the vote WBTC held/locked in DeFi had not risen. It has since skyrocketed from $10 million to a whopping $21.43 million [a new ATH], at the time of writing. 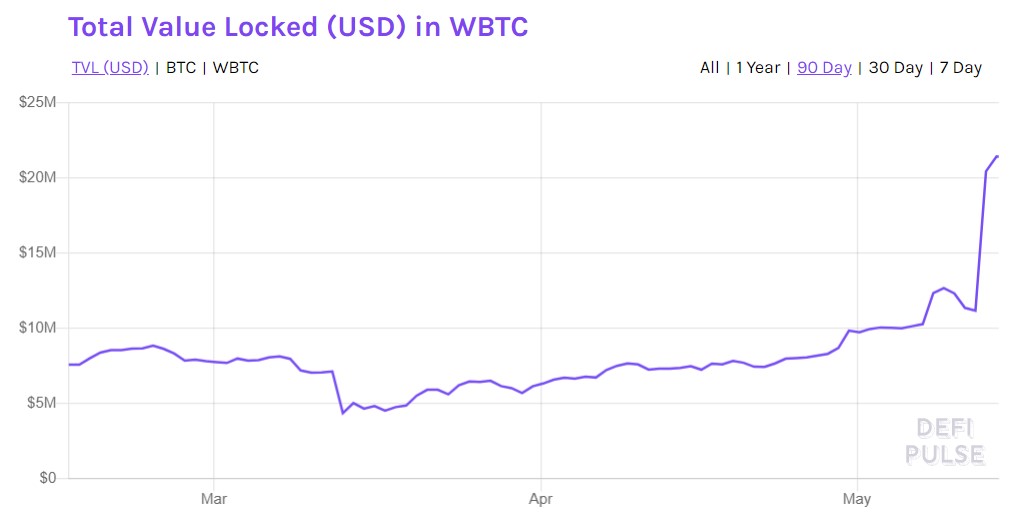 As seen above, before the governance, the WBTC locked was stagnating; however, since the decision, it has spiked by 113% and the total BTC locked has risen to 2,300 BTC. In fact, the aforementioned spike has been more striking and rapid over the past two days.

Out of the total $835 million locked in DeFi, roughly $30 million comes from BTC [which is 3.59% of the total], while Ethereum locked in is at 62.2% or 520 million. This shows that BTC has a lot of room to grow and dominate in all things DeFi, at least not that there is a direct portal. Even though the percent value seems small, the value in USD is a lot, as BTC’s price is humungous when compared to other assets like BAT or ETH.

What this means is, in theory, is that this would make the stablecoin Dai resilient against volatility shocks to a single collateral type, and it would also open up its system to a new ecosystem, and it would increase Dai’s liquidity.