A rocky turn of events for Bitcoin over the last 72-hours saw the largest digital asset plummet in valuation from $9843 to $8879 between 20th May and 21st May. Even though the asset has gained over 40 percent in the last 30-days, the community was beginning to expect a period of correction for Bitcoin, after the asset struggled to breach the resistance at $10,000. 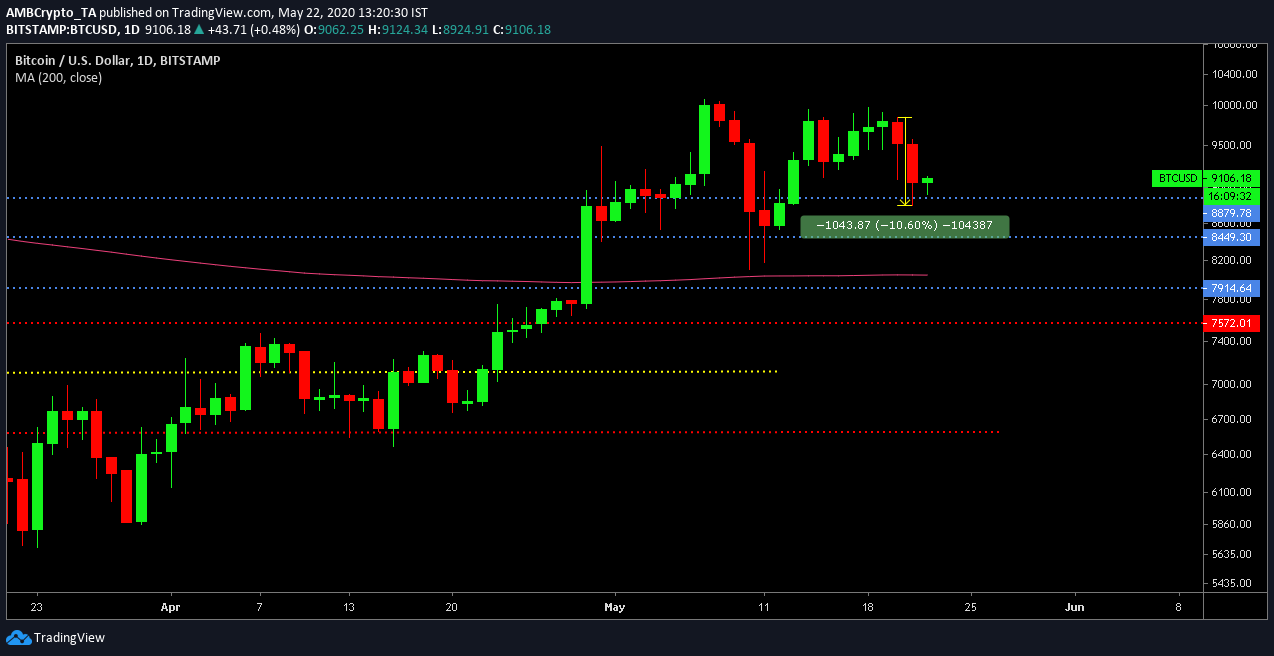 With major supports at $8800 still holding strong in the charts, Bitcoin might enter a new range of consolidation which might get limited to $9500 to $8800.

However, other factors in the traditional asset class and economic factors between nations might trigger another potential rally from Bitcoin down the road in 2020.

Will the commodities rally come to Bitcoin’s aid?

Since the depreciation in March, if the narrative of the large-cap gold miners (GDX) is observed, it can be identified that the asset has already broken out of an 8-year resistance and the bull market is underway. Since March 22nd, the precious metal has registered a positive turnaround of 19.77 percent, as its prices have increased from $1455 to $1737.

Now, according to a Stack report shared with AMBCrypto, it was observed that the commodities market was on a rise and mainly Gold, Silver, and Oil enjoyed a period of positive returns over the past 7-days. Such sentiments had led to the investors taking a risk-on approach on the largest precious metal, as it broke away from its 2012 levels, as mentioned earlier. Many speculated that a continued drive might see a Gold breach above $2000 over the next few months. The report added,

“This bullishness comes on the back of fears that another US$3 trillion economic stimulus package could be on the horizon. Coupled with rising global geopolitical tension underscored by deteriorating US-China relations, more investors are jumping on  the bandwagon for safe-haven assets.”

Where does Bitcoin fit in the picture?

Now, with the continued rise of risk in inflation and economic distress, traditional investment managers are turning their heads towards such commodities i.e Gold, Silver to hedge against devaluation. However, there is also a sense of elevated enthusiasm in Bitcoin as an alternative asset to Bitcoin.

Undoubtedly, the digital asset has maintained close relativity to its commodity counterparts, posting gains as it trends upwards and realizes a newfound maturity as a store of value.

As Bitcoin’s correlation with the stock market has continued to taper off in the past couple of months, the potential of Bitcoin as an alternate hedge has only improved. Bitcoin‘s investment attributes have also been more prevalent due to the growth of the futures market, and the number of investors strategically allocating the asset is a major possibility in both the short and long term.