Less than 24 hours after most of the world called curtains on 2020, it is fair to say that Bitcoin closed its shop in the best way possible. It should be noted, however, that for the cryptocurrency market, the past two weeks have been incredibly lucrative.

Bitcoin crossed its previous all-time high on 16 December and since then, the crypto-asset has been on a price discovery path. Bitcoin has risen by 51.99% in the last 14 days alone, with no signs of slowing down. While the price seemed to be dwelling at a record-range, its adoption from a global perspective continues to remain minimal.

According to studies, the adoption of new technologies, ranging from the Internet to smartphones, and now cryptocurrencies, all lead to an exponential S-curve function. The initial phase is acceptance, and it is largely underwhelming, while mainstream explosion catches on. Something similar is taking place with Bitcoin, at the moment, with the global Bitcoin holders ranging from 30-70 million.

A close estimate is 1%. That is surprisingly low, considering Bitcoin is currently undergoing its 2nd bull run at a price level of $29,000. 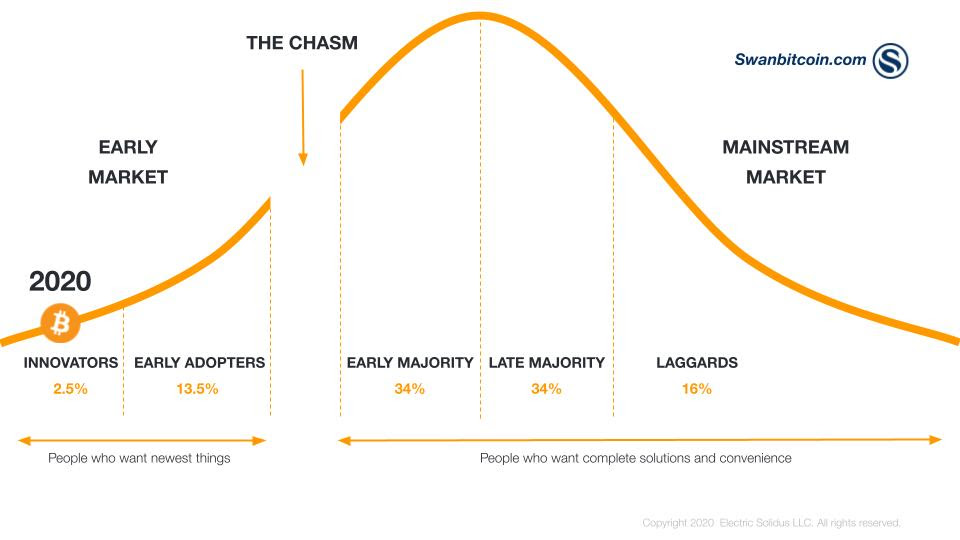 The attached chart highlights Bitcoin’s adoption phase. In spite of being 10 years into its existence, a huge proportion of current Bitcoin investors and users are still in the Innovator’s category. A majority is still against its usage, but it is slowly gaining momentum.

It is speculated that a majority will start to shift towards Bitcoin once it becomes a household name among institutions as well. We are possibly witnessing that shift at press time, as these are some of the major institutions’ price predictions for Bitcoin in the coming years,

The main thing clear with these price forecasts is the increasing interest and eventual improvement of demand for Bitcoin. While it is strongly advantageous for Bitcoin’s price in the long-term, certain implications may arise as well.

In one of our previous articles, we highlighted that a major issue with BTC accumulation tallied to the higher chances of a massive-sellout. Any organization in the future aiming to profit from their allocations may decide to dump huge BTC holdings, an act that could seriously affect the price, if and when.

With adoption, we are running the fear of concentration as well, as Bitcoin edges towards a new financial landscape with the institutions.