XRP fan following on the rise; records a majority of positive tweets in every country Even as Bitcoin continued to dominate yet another chart with a flow of exceptionally positive sentiment on Twitter, XRP recorded a majority of positive tweets in every country. Owing to Ripple’s ongoing developments, collaborations and the recent onboarding of several industry experts on its platform, the XRP community has been mostly positive about the technology and the firm. This is true, not just in the US, but across the world as well.

A recent research report by The Tie revealed,

“While longer-term sentiment metrics on XRP are negative, conversations are now positive in every single country. No other coin in the top 5 by market cap has a majority of positive tweets in every country.”

According to the report, Singapore recorded a massive volume of 85.45% positive tweets about the digital coin. This was followed by Brazil with 85.42% and Croatia with 83.75%. Of all XRP tweets, Turkey stood fourth with 74.63% optimistic tweets, and Sweden was ranked fifth with 71.43%.

At press time, the sentiment for the coin stood at 53.05% neutral, as it tilted towards the positive side. 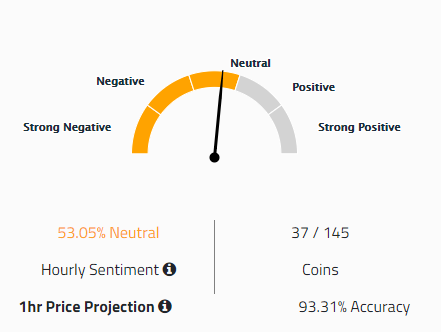 The research also provided conclusive evidence of countries with the “Least Positive” XRP tweets. These were Mexico with 53.19%, South Africa with 57.58%, Belgium with 58.12%, and Nigeria with 58.82%. Japan, with 60.1% tweets, had the highest volume of a negative tweets about XRP.

Following XRP’s trail was Litecoin. In terms of attitudes toward Litecoin, the research found that 85.42% of the positive tweets came from Russia. This was followed by positive sentiments from Indonesia and Turkey with 79.59% and 78.26% tweets respectively, on the social media platform.

Spain and Singapore with negative tweets of 63.89% and 62.07% respectively, topped the list for “Least Positive” sentiment about Litecoin.

Ethereum garnered 81.9% positive sentiment in Pakistan. This was followed by Ukraine with 79.14%, and South Africa 78.57%. Netherlands and Nigeria remained highly positive for the second-largest cryptocurrency by market cap, Ethereum. Countries found to be extremely negative on Ethereum were Mexico with 54.84% negative tweets, followed by Belarus and Seychelles with 50.89% and 44.78%, respectively.