Eugene Kaspersky joined the list of major personalities with opinions on Bitcoin after he said that the coin was ‘great,’ but its mainstream adoption by replacing traditional financial institutions was likely to take a century and that the world was not ready to embrace them yet.

In a recent interview with the Dubai-based media house, Arabian Business, the Russian cybersecurity expert and the CEO of Kaspersky Lab, Eugene Kaspersky said that while cryptocurrencies will eventually disrupt the financial space, there has to be single governance across the world. He said,

“Cryptocurrencies are a great idea, but the world is not ready for them yet. The world must be united if we want to have encrypted currencies. At the moment, governments will want to control them.”

The CEO maintained that the digital currencies will be successful only if governments quit trying to control them. He further asserted that the current financial system can leverage the blockchain technology to bring about modifications.

The multinational cybersecurity and antivirus platform is presently entangled in allegations of developing spy tools for the Russian intelligence agency. Kaspersky dismissed all such claims, calling them ‘fake.’

Kaspersky believes that countries will try to ‘forbid’ crypto usage because of their decentralized nature since the people in power like to take control of money. However, he warned, these digital assets will be outrightly banned the moment they try to oust fiat and traditional paper money.

While many major industry entities have asserted that crypto assets, and Bitcoin, in particular, have the potential to take over the world, a few players have been skeptical about its scalability and the whether or not it can supersede traditional paper currency.

A network that spans worldwide, Bitcoin’s adoption has undeniably soared over the past couple of years. As charted by Blockchain.com, the number of confirmed Bitcoin transactions per day has also thrived.

The adoption continues to grow even as Bitcoin and other crypto assets are going through a bear market. According to the online stats portal, Statista, the numbers of blockchain wallet users has also significantly increased. 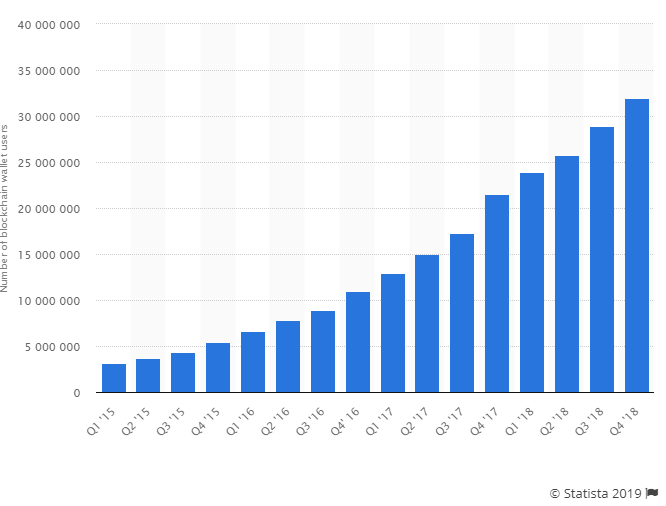