On 13th August, O3 labs announced the launch of the O3 V2, a new iteration of the existing O3 wallet. The company has stated that the new version of the wallet is packed with features and caters to users’ demands. O3 is the first mobile wallet based on the NEO network wallet and the new version has been released for both Android and iOS users. 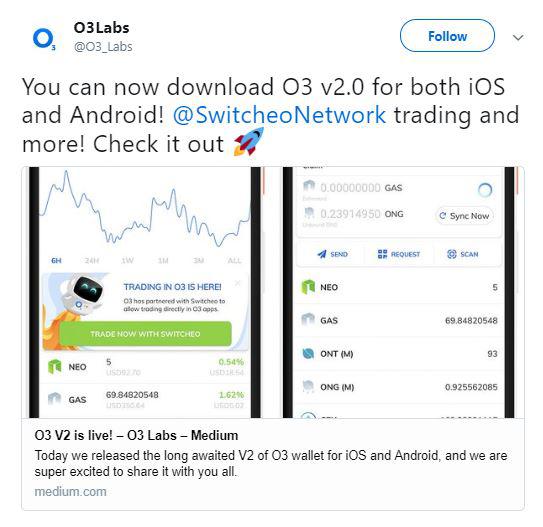 The stand-out feature of the new version, according to O3 labs is the added feature which allows users to directly trade on the Switcheo exchange. This new addition comes after the partnership between NEO and Switcheo Exchange that had occurred a few weeks back.

It was announced that Switcheo, a cryptocurrency exchange based on NEO, have integrated Ledger devices for use with their exchange platform. Hardware wallet integration has been one the most frequently requested feature for Switcheo to adopt.

The O3 wallet has given users a glimpse of the features packed into the V2 version:

The NEO partnership with O3 labs has allowed users to trade ‘direct from wallet’. The company has stated that the trading experience has been made more seamless and interactive to allow the inclusion of a bigger user base. Users are asked to visit the trading marketplace, press the ‘trade’ button available on Switcheo, login, and link with the O3 wallet to carry forward the trade.

O3 has stated that security is of paramount importance and that is exactly what the company has done by creating a secure ecosystem for third-party applications to conduct trade. The organization has also informed users that a variety of apps will be added on the platform soon.

The new marketplace feature on the wallet allows users to learn more about cryptocurrencies and its listing information, says the company.

“The marketplace has been in the app for a while, but until now, felt a bit bare and unnecessary. This was because we released it early, in anticipation for new features to be released in the future.”

“Great job guys, 03 definitely will be a wallet I will use frequently, these are the first steps needed to get the masses effortlessly creating wallets, and exchanging crypto easily.”